How it actually began...

L'autre Vie #12 My Other life in France.

The very beginning of our french adventure.

We'd been fortunate to have travelled quite extensively as a young couple in our mid 20's, when my husband pursued his flute studies in London, and we took the opportunity to see quite a bit of Europe -as you do.

Our fascination with France remained a constant source of intrigue in our lives and beckoned us.

In our early 50's, long before we considered buying properties there, we had some wild notion that as professional flautists, and with my ability to trot out a song or two, we could play our way through France and perhaps "sing for our supper" so to speak. This was, in fact, possibly a very naive idea but I can tell you, we had a lot of fun trying!

We ended up in the Loire Valley on one occasion, in the beautiful town of Amboise- pictured below.

We had stumbled upon a rather wonderful Manoir in Amboise managed, and lovingly restored, by a couple from Boston. Their Manoir had beautifully decorated bedrooms named after legendary french women. The " Madame de La Fayette ". "The " Madame du Barry " for example, and rich Americans, and the like, flocked to this up market Michelin-rated luxury B&B as a wonderful french escape. The price tag matched the décor and was quite beyond our humble means.

There was, however, a "Garden House" attached to the Manoir and this provided self contained accommodation without the frills. It had a back entrance with quick access to the town and a side entrance that accessed a beautiful cottage garden. We struck a "deal" with our hostess and our accommodation was discounted if we'd provide a little Soirée in the evenings for the guests. We readily agreed. ( The Manoir with rose arbour, drawing room and one bedroom, are pictured below. ) 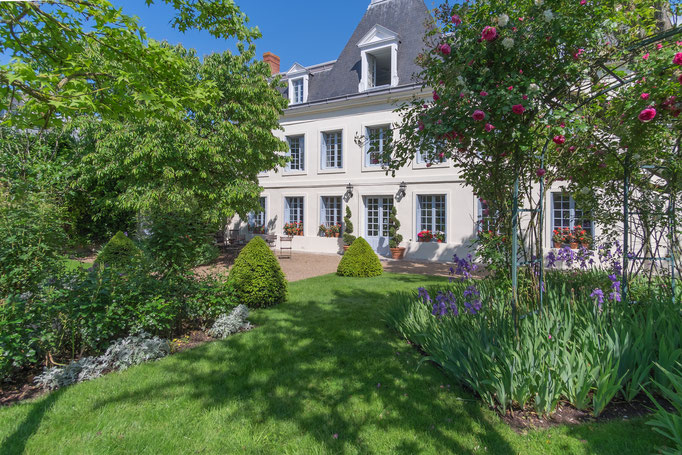 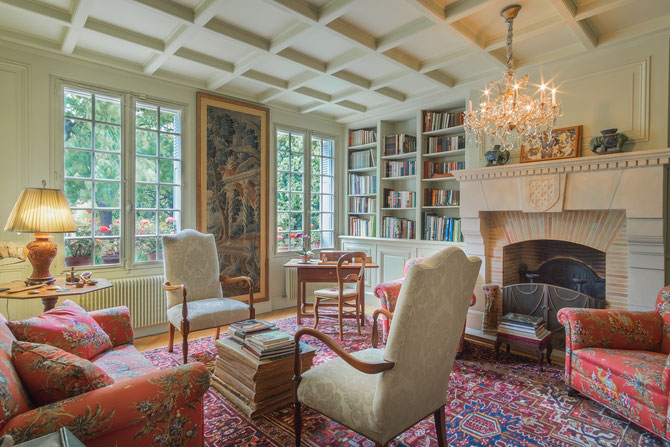 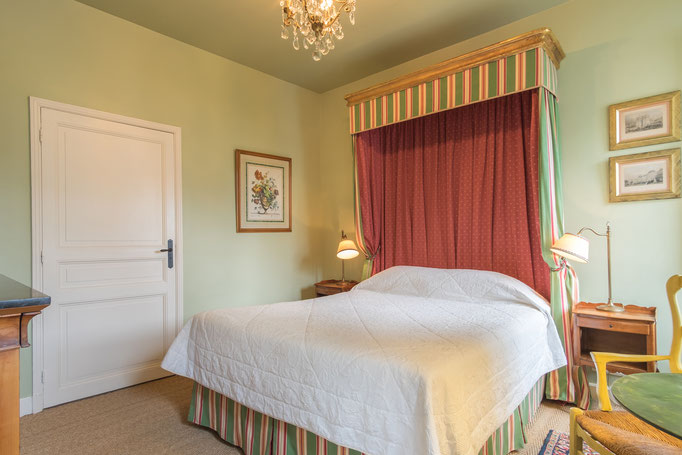 We had fun sightseeing during the day, and in the evening would don our glad rags and present a small recital. My husband did all the introductions to our program in fluent french,- as our hostess had also invited her french neighbours to attend. When I opened MY mouth to speak the audience actually fell about laughing. It didn't take long for me to realise that they thought we were both French! My Aussie accent was a dead giveaway and highly amusing after Neil's excellent french accent.

We had our own small Bose speaker with us- attached to Neil's computer- on which we had downloaded some very excellent backings. So we played flutes and I sang a selection of repertoire underneath an arbour laden with pink roses. A simply heavenly setting. It was about 6 p.m. and 25+ guests and friends had assembled on the lawn opposite.

Now our hostess (whose name I shall protect), was very good at giving orders to her compliant husband. They reminded us somewhat of Jack Spratt and his wife in appearance and in fact, our hostess was indeed a real character with a full blown, extremely loud, American accent. Her voice could be heard echoing throughout the house and gardens daily, as she um.....instructed her eternally exhausted husband to do this and that. We watched him cleaning, polishing, climbing ladders, pruning, raking etc and as he was far from young, we often felt like running to his aid!

Now on this particular evening we had decided to play a selection from Handel's " Water Music". Everything I'm about to write is absolutely true.

We had launched into a well known movement when suddenly water began to spray all over us AND the audience from every direction. The reticulation timer had not been turned off and the sprinklers burst forth as if on cue!

Somehow we managed to save the lap top and speaker from damage and dived for cover as we watched aghast at the audience. They were drenched! The look on our hostess's face was classic, but somewhat alarming, as she glared at her poor husband.

We retreated indoors to continue after a good towel off. (The photo at the very top of the page is in the drawing room of the Manoir as we finished the recital.)

After we'd exhausted all playing possibilities in the Loire Valley we ventured further South into the Dordogne Valley. This one decision would change our lives forever. I remember to this day, the elation, and also the belonging I sensed as we began to drive through the lush, green valley, replete with enchanting Chateaus. It was breathtakingly beautiful.

Not having any accommodation booked, we stumbled upon a pink Hotel in the middle of the Dordogne. It seemed just our speed at the time, and, as it was hot, the hotel pool was an added bonus. We booked in. 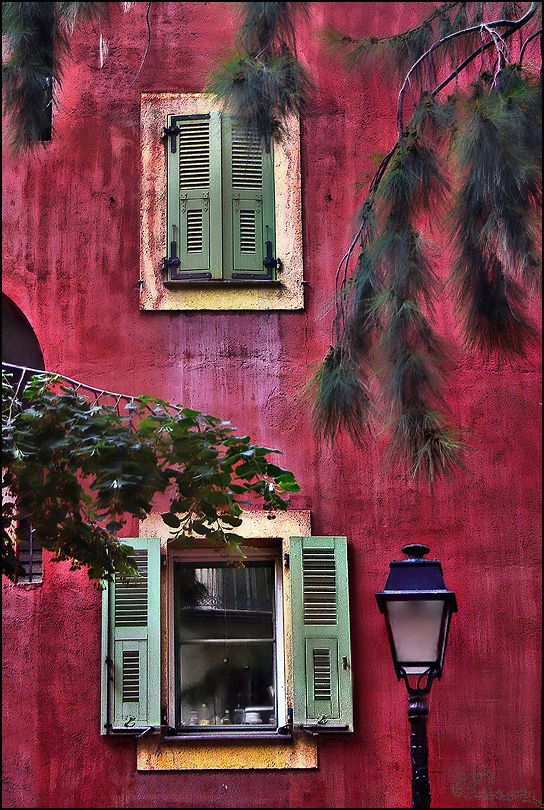 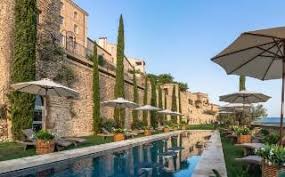 Now this is a slightly embarrassing story because it refers to the consumption of quite a lot of alcohol. Rosé in fact.

On the second day of our Dordogne Pink Hotel visit we were having a dip in the pool. My husband asked me if I'd fancy a glass of rosé that we'd rather enjoyed the night before at dinner. "Ooooh! Lovely" I thought. So, not yet wet , I elected to go and order it. When I saw the waiter, I tried in my very best french to say, please, could we have a bottle of the lovely Rosé we had had the night before. Not a cheaper carafe. No. The BOTTLE!

Quite a few minutes passed and to our astonishment, out came the waiter brandishing a tray, with a bottle of Rosé on it and a carafe of it as well! Oh dear. Back to French 101 for me.

What could we do?

We drank it of course. Well, most of it.

By the time dinner time arrived my, ( normally relatively reserved ), husband was in a REALLY happy mood. He commented that the the food ( which was rather ordinary fare ) was incredible! He summoned the Maitre d' with a flourish of his hand.

At this point, I was getting nervous.

The Maitre d' arrived with a wide smile of anticipation. This smile vanished to a rather curious wince as my dear husband announced that he and I would express our thanks to him, and the entire establishment, by performing a recital after dinner. I looked at him in complete astonishment. You see, one really needs one's faculties to be in top form to play any kind of musical instrument well. But to play at recital standard to an expectant audience, having drunk too much wine, is really tempting fate. How was I to make my fingers work? Too late. My husband had gone to fetch our flutes whilst I was left to encourage the Manager that indeed we actually WERE professional classical musicians and all would be well. He seemed very relieved at this information. I prayed.

Slight problem. No music stands. I quickly fetched two high chairs from the kitchen. Somehow they would suffice?

Meanwhile the restaurant, which was packed with people, was suddenly hushed. The Manager was making the grand announcement. An impromptu concert was to be given by internationally acclaimed musicians. Please everyone move to the terrace!

My husband emerged, with flutes and music, looking ridiculously confident.

Somehow, I think mainly from years of practise, my fingers did as they ought. My tongue however was quite another story. It felt thick and fuzzy and the ensuing articulation required to play the difficult pieces was just an experience I will never forget. We both nearly lost it a couple of times when things almost unravelled and we realised how funny it all was. We got away with it though. Just.

The applause was deafening. The assembled crowd were on their feet smiling.They loved it!

The Manager appeared from the back of the crowd with a tray and two glasses.

" I thought I would thank you with your favourite bottle of Rosé! "

L’ autre vie “What other life?"